On Sunday afternoon, four days ago, we flew into Tswalu Kalahari Reserve on a small private plane. 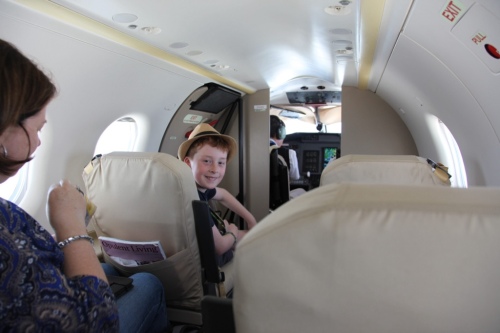 On a seven seater plane to Tswalu

Tswalu is the largest private game reserve in South Africa; 100,000 hectares of land in the southern Kalahari. Over the past 10-15 years the owners, the Oppenheimers, and their conservation team have worked to renew the land and to return plant, animal, bird and other species lost during periods of farming and hunting in this part of the “Green Kalahari”. At Tswalu you stay in Lodges right at the heart of the game reserve with wildlife wandering past your doorstep! 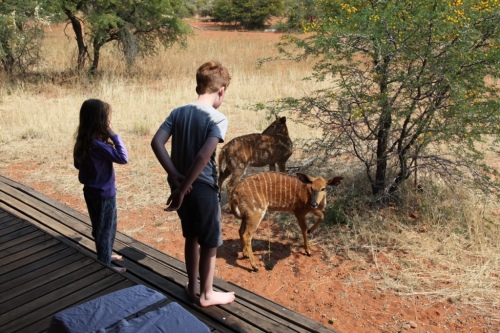 Wildlife on our back doorstep

The typical pattern at game reserves in Africa is to go on “game drives” in open safari vehicles early in the morning before sunrise and late in the afternoon as the sun sets. The wildlife is more active early and late in the day as everything and everyone rests during the intense heat of the middle of the day. So our days at Tswalu were broken into morning and afternoon/evening activities with quiet time in between: we returned from our game drives to eat brunch, swim in the pool, rest, play quietly, or read. We were miles and miles and miles from the nearest town so everything revolved around the game drives. 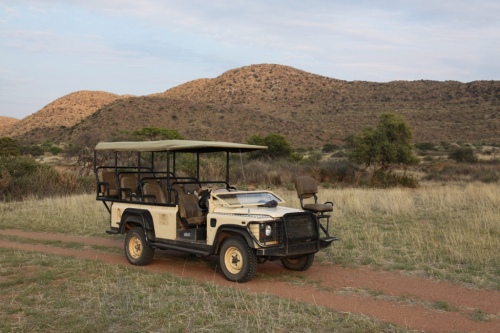 Brunch after a game drive

Relaxing by the pool

The view to the pool, waterhole and beyond

At Tswalu, which is a truly luxurious game park experience, each family, couple or group has their own Guide and Tracker. This way we were able to tailor our game drives to the things that Oliver and Louisa were most interested in: learning about tracks, seeing the animals they liked, cutting the drives short when they became tired. This arrangement of a private Guide and Tracker for each group is perfect and a distinctive part of the Tswalu experience; it means that each group has their own needs met.

Our Guide’s name was Juan; he drove the safari vehicle and interpreted for us what we were seeing. His knowledge of animals, birds, plants and the surroundings — their look, calls, tracks, habits, locations — was truly amazing! He told us he was born nearby in Kimberley, had worked on a number of game reserves, and is a “bush baby”. He was incredibly passionate about Tswalu and the Kalahari and seemed to be in his perfect job. He taught us the Afrikaans word for “truly awesome” (lekker, which sounded like lacquer to my ears) because he used it so often to describe what we were seeing. If only everyone could find the role in life that suited them so completely!

Our Tracker’s name was Ben; he sat on a jump seat at the front of the safari vehicle and looked for prints, scats and other signs of the animals we were tracking. He signalled to Juan the path to follow. Sometimes they both got out of the vehicle and walked around, peering at signs on the ground, or discussing options. They spoke mostly in Afrikaans but it was fascinating to watch them and see how their discussions and interpretations of signs around them led us to, for instance, two Cheetahs or a Leopard or the elusive Desert Black Rhino. These animals were like needles in a haystack in the huge expanse of landscape, yet everyday we found and learned about so many beautiful creatures thanks to Juan and Ben’s encyclopaedic yet somewhat mysterious talents. 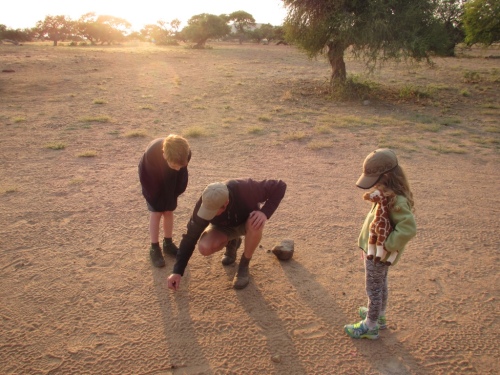 Read on to “In the wild: Tswalu Kalahari Reserve Part 2” …

5 thoughts on “In the wild: Tswalu Kalahari Reserve Part 1”