On our first afternoon, Oliver and Peter joined Juan and Ben for their first game drive. They met a lot of African animals we are less familiar with, such as this Blue Wildebeest. But mostly they were on the path of a Leopard, which they tracked down quite close to the Lodges. That night we were told to be cautious walking to and from our Lodge as the Leopard might still be close by. 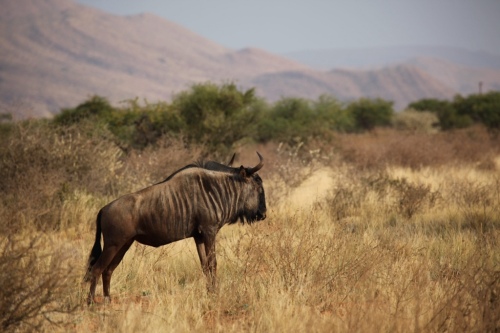 On Monday morning we set out at 6am, before sunrise, looking for two male Cheetahs that had been spotted Sunday night. Ben and Juan followed tracks in the sand and scats on the ground until we spotted them strolling along one of the dirt roads. Their stomachs were full from hunting the night before and we followed them and watched as they looked for and then settled into a comfortable resting spot for the day. It was amazing to see these animals in their natural habitat. They are highly endangered and the last time we saw Cheetahs was behind fences in the Sanctuary near Maropeng. Almost all of the animals at Tswalu are used to the safari vehicles and so we were not in danger even though we got very close. We were instructed simply to stay seated in the jeep and not to make loud or sudden movements. But these Cheetahs were happy to yawn and ignore us! 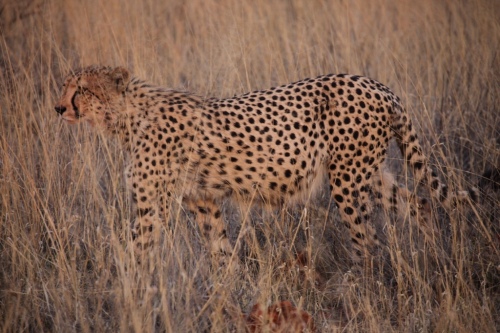 Cheetahs are highly endangered but protected and thriving at Tswalu

On Monday afternoon, continuing the good luck and/or demonstrating the great skills of our Guide and Tracker, we found a pack of 10 Lions lazing near a waterhole. This group included four gorgeous young Lion cubs. While the adult Lions mostly slept on and ignored us, the cubs were very playful and inquisitive. 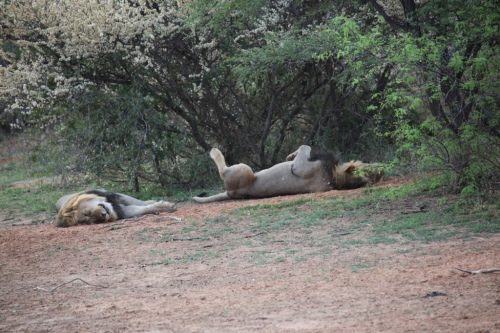 Meanwhile the adult Lions snoozed on in the afternoon heat

On Tuesday morning we set out to find a Desert Black Rhino, a critically endangered animal and one of the hallmark species of Tswalu. But he proved quite elusive! We searched for nearly four hours, following tracks, signs and scats; finding lots of other animals but not our Rhino. Finally, a call came through on the radio from another Guide who had spotted a Rhino way up on the edge of the Reserve. When we found him he was camouflaged well in the surrounding bush and stared rather suspiciously at us. Rhinos apparently are skittish and aggressive so we respectfully kept our distance from this awesome animal. After this long morning we were thoroughly exhausted but already had seen an incredible array of African wildlife in just a few days. 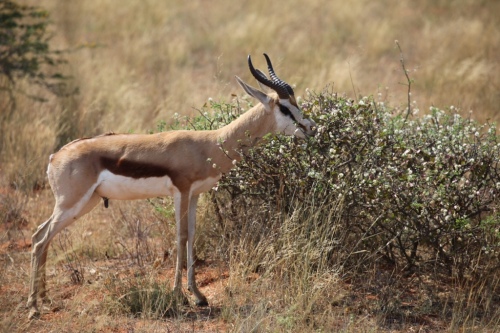 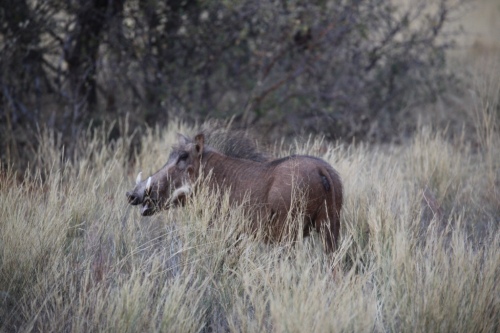 A herd of Plains Zebras 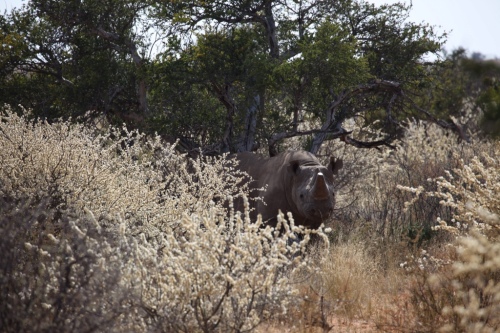 On Tuesday evening Oliver and Peter drove with Juan and Ben out onto a dune in the middle of the Reserve where they spent the night sleeping under the stars in Tswalu’s Malori Sleep-Out Deck. They were treated to a glorious sunset and delicious dinner cooked by Ben (although unfortunately ants got to their dessert before they did) before being left to the bush and the dark.

Preparing to camp under the stars on a sand dune

3 thoughts on “In the wild: Tswalu Kalahari Reserve Part 2”